October , 2018 is so good for me and I’m already in love with this month though it has only begun . There are just way too many wonders getting added to literature y’all ! Here’s a short list of all the blessings that are about to reach us .

I have been waiting for this for two years . Two whole years . I don’t know why authors

like to play with our hearts and end books with cliffhangers but the answer to all my questions is coming along this month . Can you see me doing my happy dance ? Yeepee…I’m so excited for it . Congrats to all of us Maasassins who completed their years of waiting . We’re finally getting our very deserved awards * flips hair *

“A princess who was to live for a Thousand years. Longer. That had been her gift. It was now her curse.”

2. Muse The Nightmares by Laini Taylor :

I blame all you book people for getting me so excited for this once . I was actually neutral

after the first book and now look at me , I’m actually celebrating the book’s come out with my …laptop . I’m going to get it today and will hopefully complete reading it soon ( What a joke )

“Once upon a time there was a silence that dreamed of becoming a song, and then I found you, and now everything is music.”

I can see me crying over this book in my distant future but what’s a little heartache , right ?

3 . An Assassin’s Guide to Love and Treason by Virginia Boeckar :

This one is about a girl whose father is killed for practising catholic . She later discovers that her father was also plotting the queen’s death and she decides to travel to London to kill the queen herself. That’s when she meets a spy who works for the queen and sparks fly . Added Bonus : It’s set in Elizabethan England .

The blurb sounds intriguing and I can’t wait for 28th october to roll around .

4 . Song of the Dryad by Natalia Leigh :

Alright…I’ll confess . I first added this to my tbr because of the cover . Yeah , I judge books by cover …but the blurb is also promising . 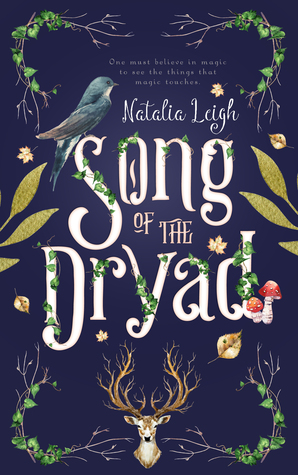 When Charlotte’s search for her mom leads her into the fairy realm, she discovers that she hails from a line of Shrine Keepers – humans tasked with maintaining ancient fairy shrines. Charlotte’s family has failed their duties to the fae, and now she has no choice but to strike a deal with the dryad, an ancient and powerful tree nymph responsible for her mom’s disappearance. But the dryad only gives her a month to complete her task: retrieve five stolen fairy stones and return them to the ancient fairy shrine. If she doesn’t return the stones in time, the dryad has threatened to imprison another of Charlotte’s loved ones.

Tell me if that isn’t interesting .

5. Where She Fell by Kaitlin Ward :

The blurb caught me in its web again and I hope it’s not a disappointment . It’s about a girl named Eliza and although the story sounds a little similar to ” Journey to the Centre of the Earth” , I think it’s going to be awesome .

There’s a ‘sinkhole ‘ near Eliza’s home and there are rumours abound that people who fall into it never come back . And as a geologist she doesn’t trust them..but she can’t help being worried when her friends drag her there and her worries are proven correct. She finds another society within..but that isn’t home .

Seriously , don’t you think this October is magical ? And quite frankly , the kingdom of ash tops everything for me . What book are you looking forward to this October ?

One thought on “Books in October”